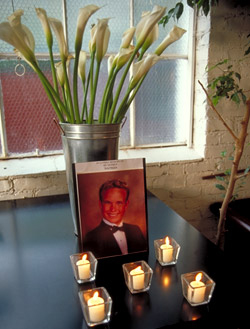 ATLANTA, GA—3TEN Haustudio presents “A Convergence of Faiths.” This exhibition of new work by Diane Hause explores the juxtaposition of the world’s major religions during this time of great turmoil and upheaval. The show consists of many large and medium-sized paintings as well as a board game called “The Afterlife” and a life-size replica of a confessional booth. Hause intertwines the symbols associated with spiritual beliefs amongst images from recent world events in her paintings and posits a possibility for coexistence based on hope and acceptance.

Hause says her current series came to her through a dream in which the Kabbalah, the Jewish Tree of Life, was featured prominently. After a synchronistic series of events in the days following in which the Kabbalah symbol appeared in several other instances of her daily life, she began to work with it as an image and content for her paintings. Using paint, collage and assemblage Hause constructs images with multiple meanings, most notably in a diptych titled

“Twin Towers” in which on one of the panels the face of Mohammed Otta, a 9/11 hijacker, is placed on a figure cradling the Koran in his arm. On the other panel is a kimono-wearing Japanese woman who peaks out from behind a fan in which photographs of the Twin Tower’s destruction have become its fabric. In a group of small circular images that feel like mandalas, photo clippings of the Menorah, ancient texts, and Mother Mary are collaged into complex and beautiful images such as the one in which an aerial view of Muslim pilgrims are “held” by a pair of hennaed hands.

The arc that has brought Hause’s work to this point was proceeded by an earlier series on Afghanistan women which also originated in a dream occurring long before the events of September 11 put the US and Afghanistan on a collision course. Her work intuitively touches on those places, both literal and sociological, in which there are so many layers and opposing interests that it seems impossible to find truth. Yet her images poignantly reflect her ability to “see the beauty in anyone who believes.”

As Hause was working on this series with events in the Middle East escalating to where we find ourselves today, she found the artwork to be healing. “In some ways when you feel so helpless….this work was sacred, there was a holy feeling that occurred,” says Hause. When she placed a clear plastic dome painted with two peace doves atop the atomic symbol at the spot where collaged texts of the Koran, Bible and Torah come together in the title piece “Convergence” it was her way of trying to affect the situation somehow, to imagine it anew. 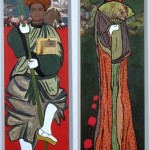 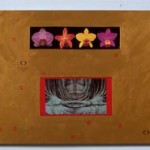 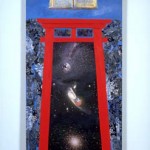 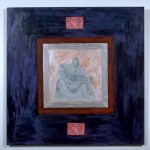 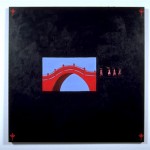 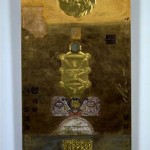 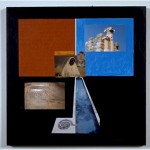 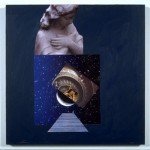 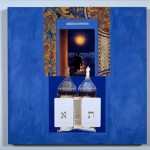 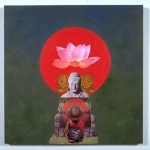 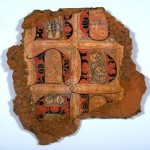 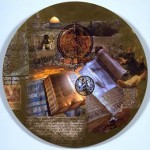 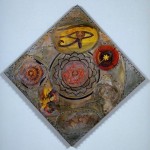 Eye of the Beholder – SOLD 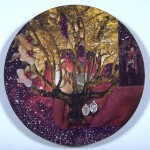 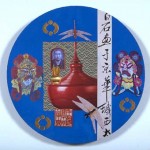 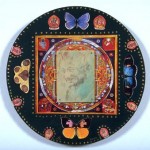 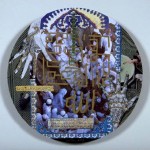 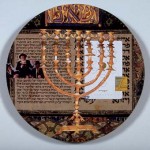 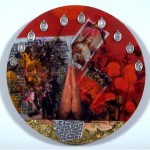 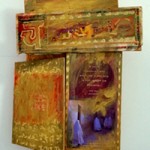 After Life The Game 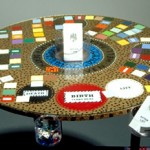 After Life The Game – Detail 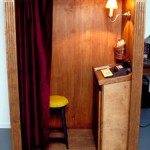 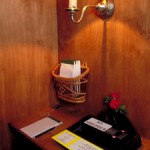