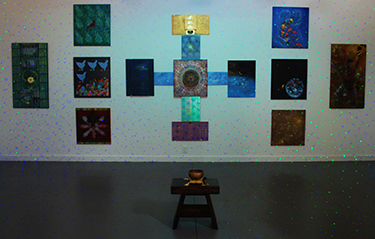 A Girl With Kaleidoscope Eyes Artwork – 2015 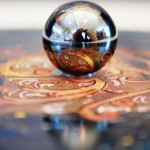 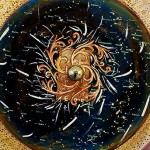 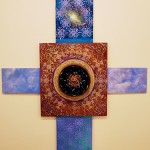 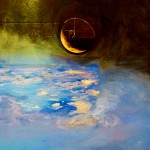 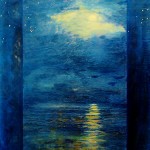 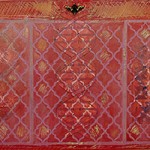 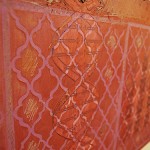 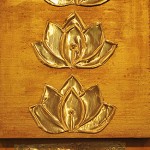 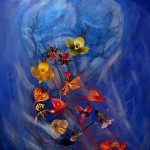 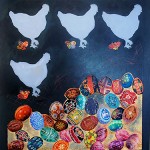 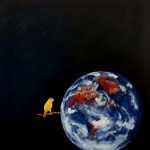 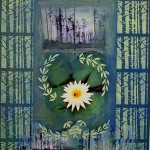 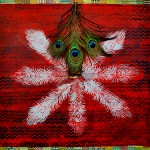 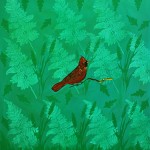 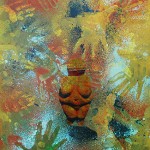 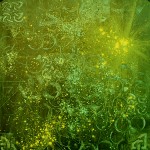 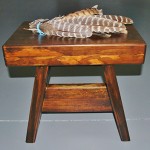 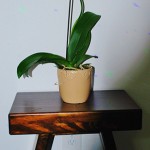 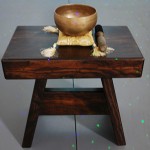 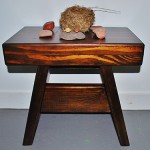 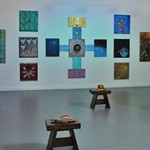 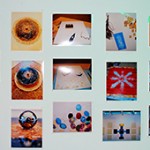 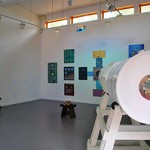 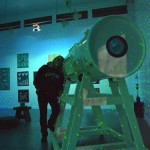 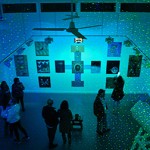 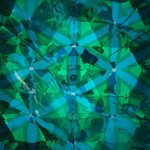 Diane and I talked about her new series as I was interested in her approach, from inspiration to execution. It is not necessary to have experienced Diane’s last installation, “Eyeing the Cosmos While Astride the Abyss” but it does help to penetrate Diane’s journey with stage 4 breast cancer as this previous work allowed you to experience how Diane processes, creates and shares the current context of her life within the content of her work.

I was initially impacted with the shape and beauty of her panels, coupled with the desire to move closer and explore them. Diane has brought her unique style not only to the painted panels, but with her entire approach to the space itself. The sculptural 8 foot tube-like structure midway the gallery turns out to be a hand built kaleidoscope. As Diane explained, “it wasn’t until I finished all 18 panels that the shape they took led me to think of a kaleidoscope. I met with my friend and helper, Walter Bullard, and after our brainstorming, he built this one. Next, I started to entertain the space as part of the series and decided to emphasize the empty walls with laser lights.”

Diane discussed the genesis of this piece and that process was an important component. She found a patient clerk at the hardwood store and asked if he would help her in a rather unconventional way of cutting her 4 x 8 foot sheets of wood. He agreed to her suggestion of very slowly feeding it through his saw mount and to cut only when she intuitively felt led to say stop. Diane had a vague idea that she wanted this series to continue her focus on “dealing with my questions of existence, life and death, life after death, creation itself and all ideas that became more prominent after my diagnosis.” For this series she wanted to paint and to let her “instinctual feelings create the series.” This required her to trust her senses; “I sensed that there would be a circle in the center and that the other panels would surround it.” Diane relates this sensing aspect to the metaphor of how a musician hears a note and starts to build a song around it.

There is indeed a circle in the center panel and within it is a reflective 3-D mirrored ball. This gesture offers “the viewer a reflection of self and it also places the viewer in the center of my series.” After the placement of the circle, the entire configuration of the panels started with “a circle in a square” and vertical and horizontal prongs. The center panels make a cross of equal proportions both vertically and horizontally. I tell her this reminds me of a quote and concept from the author, Houston Smith, in which he explains that he finds the cross image useful; “One beam of the cross is horizontal, which stands for the horizontal dimension: our life amid observable events and calendar time. The other beam, the vertical, thrusts upward toward heaven and suggests the sacred dimension: our lives amid timeless truths. We live in time and timelessness simultaneously, just as we are simultaneously body, mind and spirit.”

Another aspect of “showing up” (process) is an image she had mentally stored after viewing a special on Ukrainian people that paint their traditional eggs. Diane had a similar desire to do something detailed and indeed, those eggs show up in one of her panels that she refers to as “Which came first, the chicken or the Ukrainian egg.” This panel is her tribute to that custom and to her continuous questions on creation. Einstein’s formula of General Relativity known as the “Big Bang Theory” is etched within the center of the cosmic circle panel. Diane explained some of the other symbols; In the moon panel, there is Einstein’s “Special Relativity” theory and an image of the “Golden Spiral” known as a geometric Logarithmic spiral. This Logarithmic spiral gets wider the further from its origin and such spirals occur in nature as in the nautilus shell and spiral galaxies. Your eye scans vertically and horizontally after you move in closer and view the “center of the center” and below it, a panel that contains an image of the double-stranded DNA helix. This panel also has a physical key attached to represent the “Key-the Blueprint of Life” as the discovery that all living organisms are encoded with genetic instruction.

The golden panel on top contains an image of a bowl and lotus blossoms that Diane states originates from her personal use of a similar bowl. This represents her practice of listening outward and deeply within through the harmony of a single musical tone. One day while painting, she had “seen” a golden light so bright in the studio that she knew she wanted a bright and golden panel to be at the top. On the right top panel there are painted hands that almost appear and disappear out of the silvery blue background. The hands are seen releasing orchids that drift in a random way that feel indicative of wind. Below this panel you see earth with a canary on a perch protruding from the planet. This represents the precarious position of the planet by the symbolic reference of the “canary in the coal mine.” To the right of this panel are randomly painted handprints that Diane explained are a reference to those seen in many cave paintings. In the center of this panel is an overlay image of the “Venus of Willendorf,” a carving discovered in Austria from the Paleolithic Period or “Old Stone Age” that also is an early indication of the desire in humans to express an awareness of self.

I asked her about the panel with the eyes peering out from under actual peacock feathers and she replied that the feathers are a symbolic image that has been used within various cultures and religions throughout history. The eyes of the peacock feather can be interpreted as an act of self-awareness and self-reflection. Another panel contains pines, cypress trees and a lotus flower floating, and if you look closely you can see a bee in the center of the flower. This panel is a reflection of Mother Nature’s creativity. There is also a solitary cardinal panel that Diane explained is historically used as a symbolic image to represent the spirit/soul. The last and final panel, completed 6 months after she began the series, refers back to some of her first panels and the questions of the explosive quality to the birth of the universe. In this panel she used dry gold pigment that she dropped and blew so it would have a combustive and visual outward thrust. Within this panel, the viewer will see circles, triangles, and geometric shapes indicative of mathematics and a return to her questions of those metaphorical questions that she poses in this work, “Which came first, the chicken or the egg?”

Throughout our discussion Diane stayed focused on the idea of process which she explained as trying to let something come through that she is not totally controlling. Or, as she stated, “it feels similar to when you have a vivid dream and wake up and try to remember it. Something about a dream and its message can feel true and real but at the same time wispy and fleeting.” What Diane has given us is a glimpse of her expressing the experience of creating and at the same time, her creation tugs at our own inner explorations. Diane gives us a visual grammar by the questions she poses and may be a conversation we all might have with ourselves about the mystery of existence, life, death, and creation.